Every single character in Chinese, both Traditional and Simplified, is made up of around 200 small “pieces” that act very roughly like an alphabet. Learn these 200 pieces and you’ll be able to easily identify and remember meanings as well as get clues about how to pronounce the character.

Every character! Even this monster: When first starting to learn Chinese each and every character looks utterly different.  The only similarity was that they all looked super complex and totally unlearn-able!

So what are these pieces? Let’s look at an example before getting stuck in detail.

One of the first words you will learn in Chinese is 你好 nǐhǎo meaning “hello”. This word is made up of two characters 你 (“you”) and 好 (“good”) – let’s just take the character 好.

好 is a simple example that a lot of people know so maybe this isn’t too impressive. What you may not realize though is that every single character in the Chinese language works this way and that there are only ~200 of these pieces in total.

Check out Wikipedia’s list of Radicals to find out what all of these pieces are and check the bottom of the article to find a lot more useful resources. 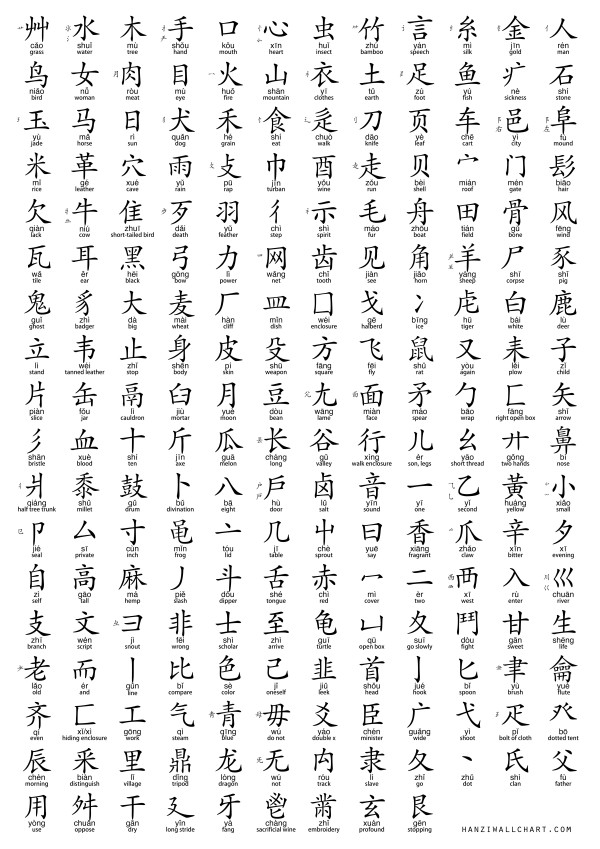 We could do this with any character in Chinese. Let’s go for a random yet relatively difficult one. Here’s a word I’ve picked at random: 矿物 (kuàngwù) which means “mineral”.  The traditional version is 礦物，which we’ll get to shortly, mainly to show the main differences between simplified and traditional.

The first character of 矿物 is 矿 kuàng which means “mine” or “ore”. 矿 has two pieces – one on the left and one one the right. This left-right structure is very very common in Chinese. We saw it above with 好. On the left of 矿 is 石 which means “stone” and one the left is 广 which means “wide”.

Neat! – an ORE MINE is a place with a WIDE expanse of STONE. That makes sense! So the character “mine” in Chinese is made up of the smaller pieces “stone” and “wide”.

The second character in 矿物 is 物 which generally means “thing”, especially a physical “thing”. On the left is 牛 which means “cow” and on the right is 勿 which means “must not”.

Huh. This one is a bit more tricky! COW + MUST NOT = physical THING.

Pardon the slight vulgarity (though vulgarity will help you remember!) : Hey! Guy! You MUST NOT BULL (cow) me! I want to see the real PHYSICAL THING before you get the cash!

So now we have 矿物 which means “mineral” and know that it is made up of 矿 ”ore”/”mine” and 物 “physical thing”. But by realizing that every Chinese character has further pieces we can break down “ore”/”mine” into STONE + WIDE and “physical thing” into COW + MUST NOT.

This is not because I happened to choose a word that this works with. We can do this with every single character in the Chinese language.

And here’s the thing I really wish I knew : there are only around 200 of these “pieces” that make up every single character.

It’s almost like a (albeit very complicated) alphabet. I hesitate to use the word as it is misleading but I think still a useful metaphor – each character can be decomposed into these ~200 pieces much like every English word in made of the 26 letters. Don’t take this too far though – Chinese doesn’t have an alphabet!

Radicals vs. Components vs. Pieces

Sometimes you’ll hear about Chinese radicals – these are the 214 official “pieces” set by an old Chinese dictionary. However when we are decomposing characters the pieces we get are not always these radicals, sometimes it will just be a character (which is in turn made of radicals).

The difference is not that important and only argued by people who care too much about these kind of things (I’m one of them…). The main thing to know is that every single character can be broken into smaller pieces and that there are only around 200 of these small pieces.

When you realize this and start to learn and recognize some of these pieces suddenly Chinese characters are not so scary. Even characters you don’t know you’ll be able to look at and say ‘Oh, that has “water” and “mouth” in it. I don’t know what it is but I recognize those pieces at least.”

Suddenly Chinese becomes less foreign and terrifying. Once you really get a grasp of these pieces you can unlock some very powerful tools – namely being able to guess at the meaning and, drum-roll, being able to guess at how it is pronounced. This is the topic of the next article in this series though on phono-semantic characters.

Interested in Traditional characters? If not skip ahead to where we discuss How to Learn these Pieces.

What about Traditional Chinese characters?

First, the 物 in 礦物 in both Simplified and Traditional is exactly the same. This happens with a lot of characters, which makes the difference between the two scripts more manageable.

The difference appears in the 礦. In Traditional there is an extra “piece” under the 广. In Simplified the word for “wide” is simply 广. In Traditional it is 廣. Therefore in the character 礦 in Traditional script the “wide” piece is different.

We can still consider this one piece with the meaning wide, so we can still think of the character as STONE + WIDE.

The piece 广 in Traditional itself has two pieces. Aha! In Traditional 广 is composed of 广 “wide” and
黄 “yellow”. All that has happened when the Chinese script was simplified was that the 黄 piece was
removed.

There are a few cases where the radicals themselves are different ( 讠 in Simplified vs. 言 in Traditional) but this is a very small number that can be learned in 5 minutes.

The vast majority of variance is instead from simply having less of the same pieces per character.

Therefore if you focus on learning the pieces that make up Chinese characters you can apply this knowledge to both Simplified and Traditional scripts and also more easily transition between the two. Chinese is giving you a break for once!

Basically as long as you are aware that all of the characters are made of these pieces you will start to notice them more and more. For now check out these tools and websites to find out more about the structure and process of Chinese characters.